This concept is what Nomos based their company ideology off of. Nomos produces modern, high quality watches without the price tag of many other brands. Nomos watches are modern, simple, and form-follows-function timepieces. The watches have no unnecessary extras like a diamond bezel; Nomos makes watches for people who appreciate quality, but don’t need to flaunt it. Nomos is all about creating understated, quality watches at an accessible price point. Something that would have made the founders of the Deutscher Werkbund proud. 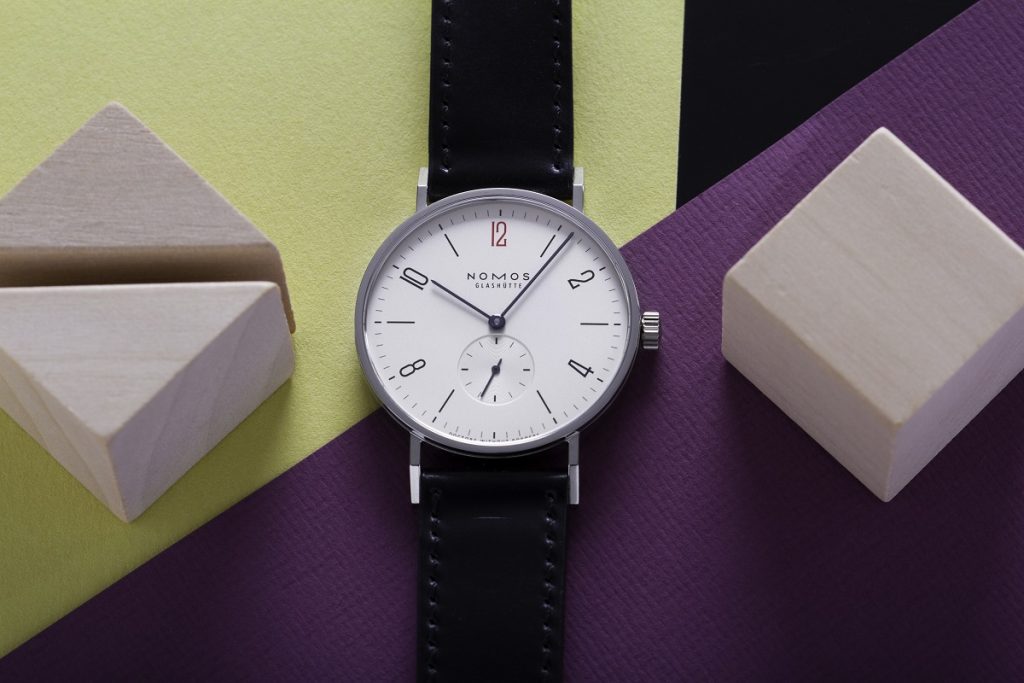 The goal of the Deutscher Werkbund and the Bauhaus was two fold. The first side was that the creativity in product design needed a boost; there needed to be something new. Mass produced objects needed to have purpose. Objects, they are not only something that you use, but a well designed object has the potential to improve the quality of life. That is what the designers of the Deutscher Werkbund and the Bauhaus strived to achieve. The other fold was that the Germans desired to improve mass production in their country. The Germans were all about producing products for the masses, yet also at a reasonable price. That is actually part of what went wrong with the Deutscher Werkbund. The products were still too expensive. The Bauhaus managed to change the way they designed, to allow the function drive the way an object was designed. Letting go of all ornamentation meant products became less expensive, and even more beautiful.

There are many Bauhaus designed objects that I adore. For me, any chair by Mies Van Der Rohe is simply stunning. He is, in my opinion, the most beautiful and simplistic furniture designer. He started his career in Berlin, and later he was the Vice President of the Deutscher Werkbund, and worked as the director of the Bauhaus for the last three years before it closed due to the war. The MR chair (1927) is probably one of the most simple chairs that he designed. Although there is some debate as to if the design belongs entirely to Mr. Van De Rohe, that is perhaps another discussion. The bent steel frame essentially misses it´s seat and the back of the chair. The frame of the chair is the most minimal form that it could be. Wrapped around the back of the chair and the seat is a beautiful piece of leather that is stitched together like a corset. In true minimalist fashion, the chair is not sewn together in the traditional sense; there are only the amount of stitches it truly needs.

One of the most popular watches from Nomos is probably the Metro. The Metro is intrinsically cool with the varied hour and minute markers. The connection between the steel frame from Mies van der Rohe’s MR chair and the lugs on the Metro is undeniable. The lugs are crafted from bent steel tubing, the lugs stop where the strap clicks in. The strap is attached between the lugs and there is a built in ‘quick change’ function on the strap, so it is easy to quickly change the strap. The lugs on the Metro are a perfect example of Bauhaus inspired, form-follows-function design. 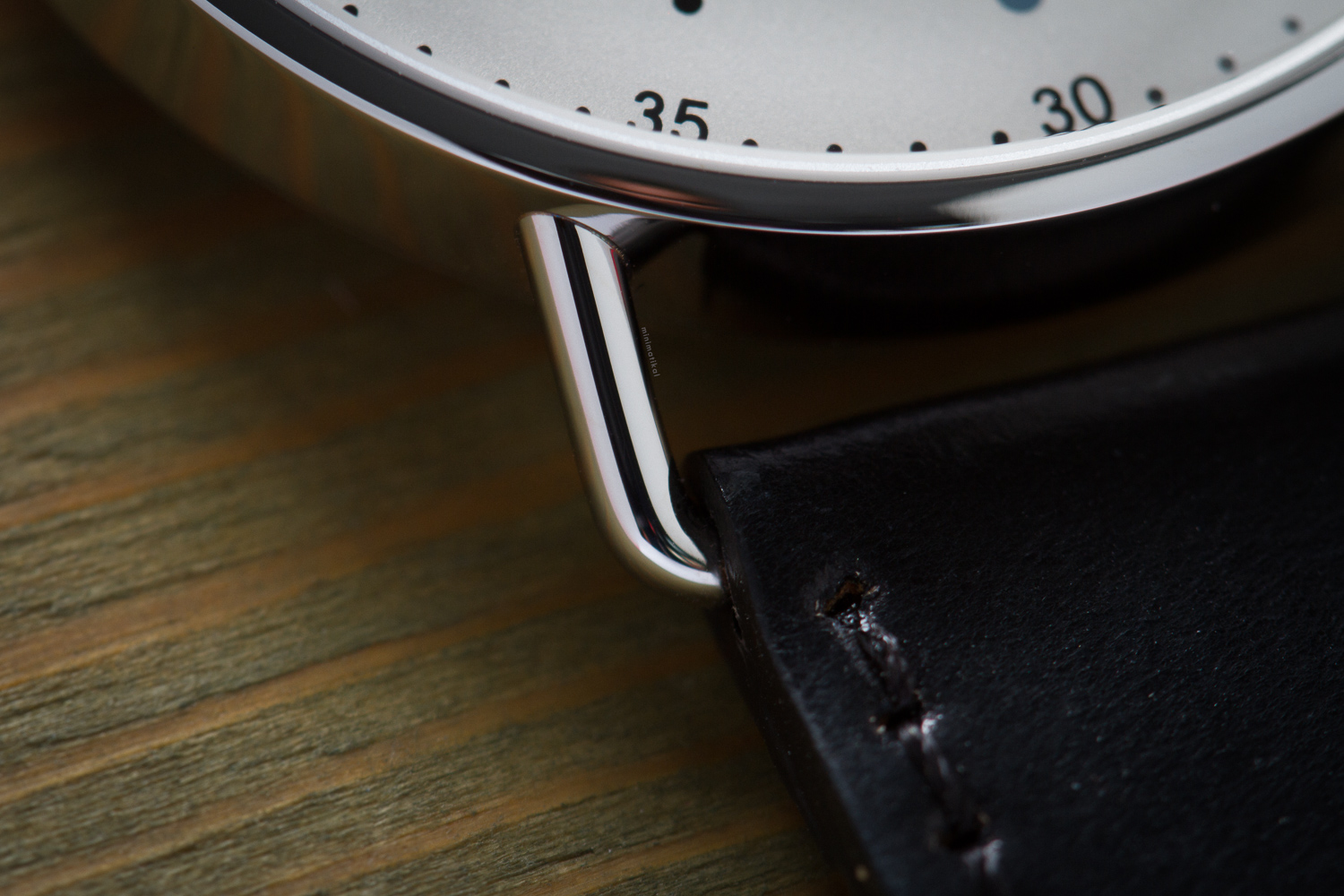 This chess set (1923) designed and produced by Josef Hartwig is quintessential Bauhaus. What is special about this chess set is that the form of the chessmen was inspired by their intended manoeuvre. Classic chessmen are made of ornate forms. Here Hartwig simplified the form to something so basic yet intellectual, that one should know what their next move should be by just looking at the chess pieces. For example, the Bishop is represented by an X, as the movement is always diagonal. Sticking to true Bauhaus principles, the chess pieces needed to be as simple as possible, inexpensive and beautiful.

While the main law of the Deutscher Werkbund and the Bauhaus is that the form must follow function, that does not mean that there is only one form available for every function. Nomos produced the perfect example of this with their Tetra collection. A simple yet architectural collection of square watches. The predictable shape of a watch case is round, simply because the hands on a watch move 360 degrees around the dial. The square form of the Tetra doesn’t change the function of the watch, seeing that the hour and minute markers can easily be moved to fit along the edges of the square case. The second aim of the DW and Bauhaus was to improve the quality of peoples lives through design. The Tetra does exactly that, it is a modern time piece with clean lines, and most importantly, functional. Nomos knows how to follow design laws within their company, but isn’t afraid to have fun while adhering to said laws. 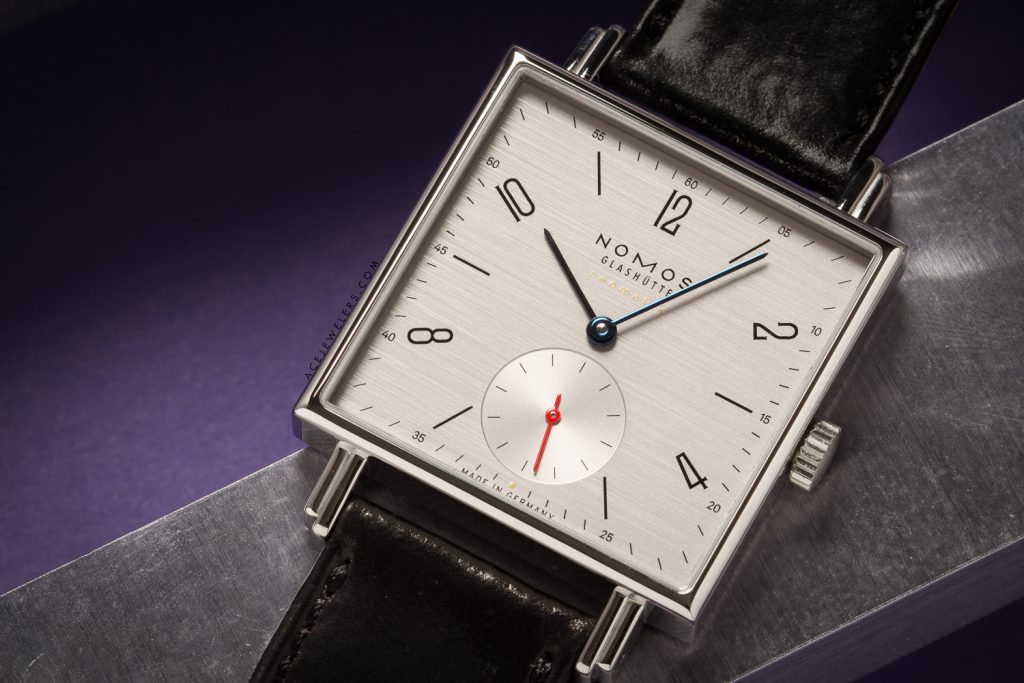 Marianne Brandt is another famed Bauhaus designer. She went on to head up the metals department at the Bauhaus school. This tea infusing pot (1924) was produced in a much smaller size than teapots we are used to. This tea infuser is only 7.3cm (2 7/9 inches) in size. The concept behind the size was that a teapot does not need to be so large in size. The infuser is designed to brew a very concentrated extract of tea, which can be added to a mug of hot water to the preferred strength of the drinker as needed; sort of like how one would add milk to their tea. The obvious elements of this teapot are that of most teapots. What does set this tea infuser apart is the location of the circular lid, which is located towards the back to avoid any dripping while pouring. This tea infuser is beautiful with it’s geometric form, bright, polished silver and black accents. The Nomos Orion Neomatik 36 takes a page of out Ms. Brandt’s book. The Orion is 36mm in diameter, which is slightly smaller than the Silver Cut Orion’s from the At Work Series. The lugs on the Orion are a beautiful form and are similar in shape to the piece of silver which the black ebony handle is attached to the tea infuser. This shape is also repeated on the nozzle of the tea infuser. Marianne Brandt’s teapot was exquisitely crafted from sterling silver and had a stark contrast from the ebony which she used for the handle for both the lid and the infuser. The Orion Neomatik 392 features a polished stainless steel case with a bright silver plated dial. The beautiful dial has a bright contrast with the black hour and minute hands and minute markers. There is a touch of avant-garde with the red minute hand and cyan accents.

Nomos prides themselves as a company for basing their ideology off of the Deutscher Werkbund. Nomos watches are produced in Germany using in-house manufactured movements. The watches are simple so it is easy to tell the time. What Nomos does best, is that they are not afraid to have some fun with the designs while still making the watches functional, high quality and affordable. The design team at Nomos’ in-house creative agency Berlinerblau is not afraid to do a bright red or blue dial, just for the hell of it. The heart of the watch is still ticking away as it should be, and the watch is still functional. Afterall, wasn’t the goal of the Deutscher Werkbund and the Bauhaus to create objects that give people more joy in their lives? Nomos does exactly that. 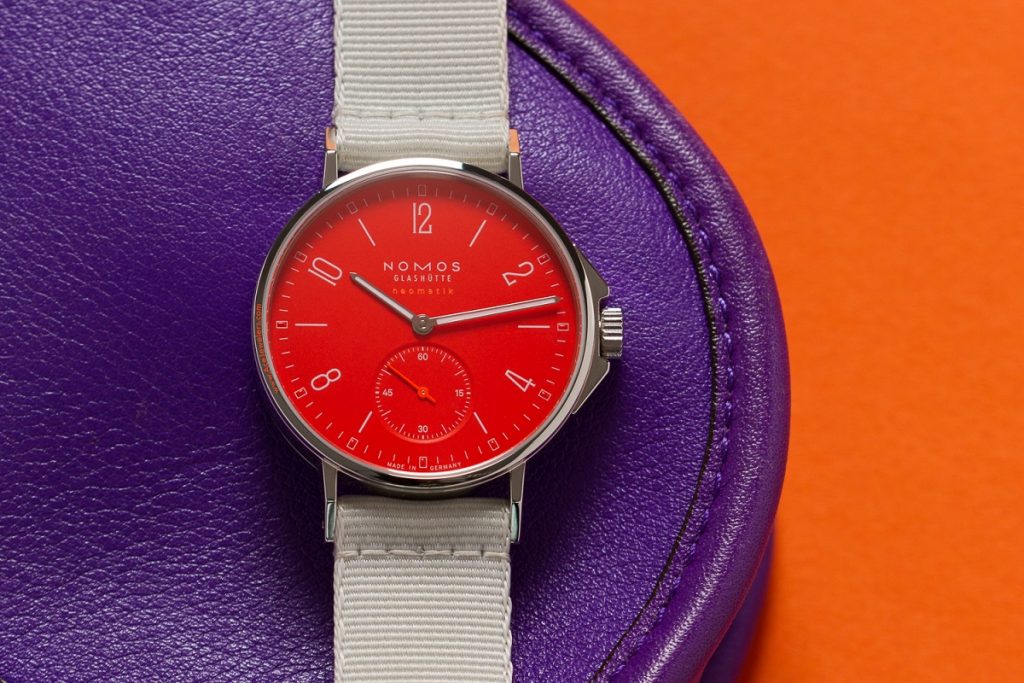