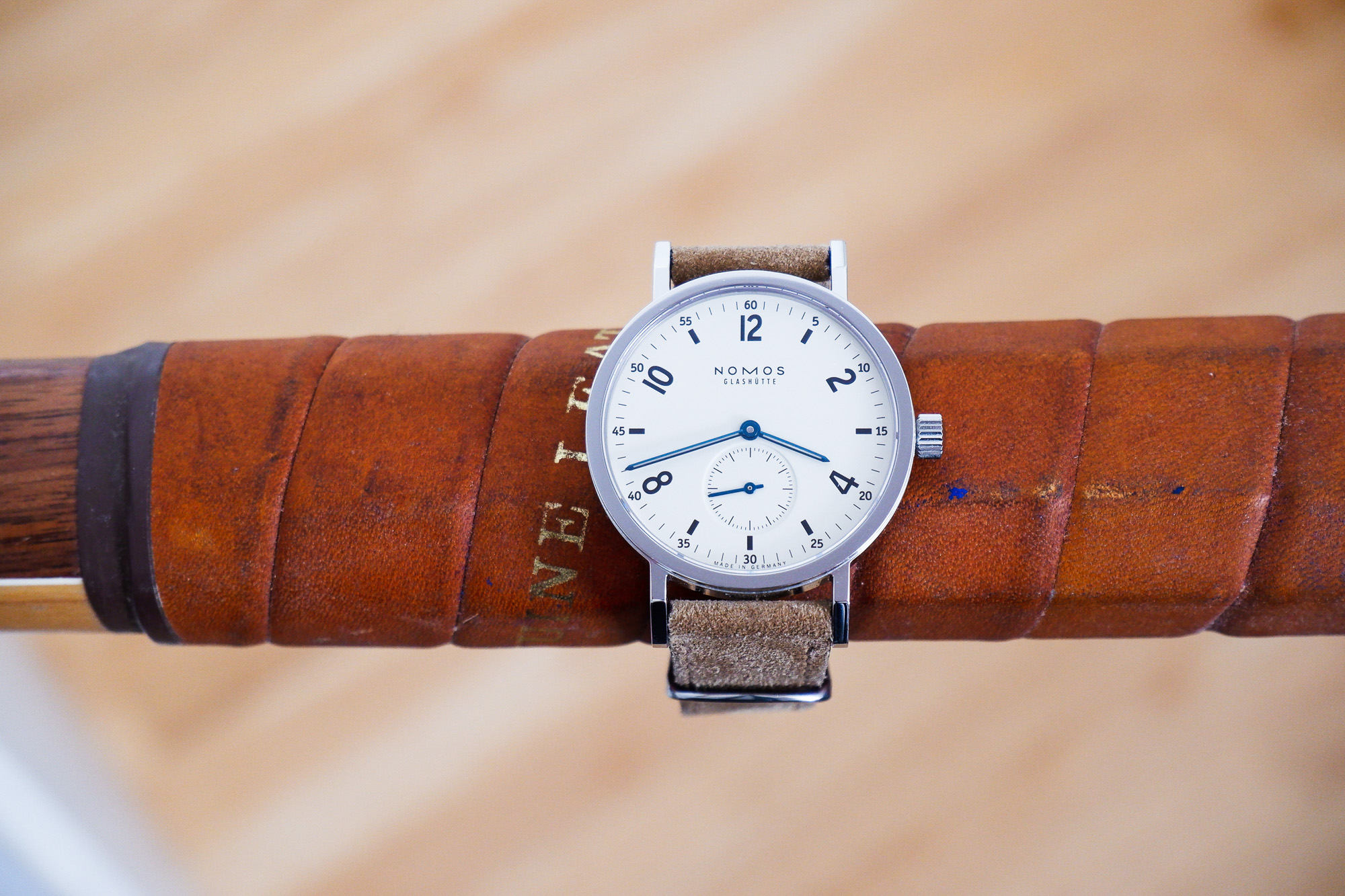 One on the most prolific NOMOS collectors of the Netherlands is without any doubt my buddy Michiel of @nomiesforlife fame. Today I’d like to share a few pics and a bit of background information on his latest acquisition; a rare 2012 Tangente Sport ‘Jump’.

The Tangente Sport was introduced around 2001 as NOMOS’ first take on a sporty -or sportier?- watch. It featured a case slightly more robust and sturdy than the regular Tangente, with water resistance increased to a much appreciated 100 meters.

I am not entirely positive when the Tangente Sport was discontinued, but likely it was around the time of the introduction of the Ahoi in 2013. In fact, I wouldn’t be surprised if the ‘Jump’ was part of a final run of the Tangente Sport. It was released in 2012 alongside the ‘Skip’ and ‘Hop’ as part of the ongoing Wempe 100 project.

What’s with the weird names? Well, according to the original press release -which I’ve posted below- the ‘Hop’, ‘Skip’ and ‘Jump’ were made to mark the 2012 Olympic Summer Games. Their names reference the sequence of the Triple Jump, a track and field event that’s been part of both the ancient as well as the modern Olympics. Makes sense I guess? anyway, the watches look great.

FRI, OCT 12, 2012 15:56 CET- With the three new NOMOS sports models that will appear at the end of July to mark the Olympic Games, you’ll jump back and forth between them before deciding on one

Try a triple jump and take them all: in time for the Summer Games in London, NOMOS Glashütte has built three special sports models for the Wempe jewelry company—all of them fit to set records. Triple jump is also called hop, skip, and jump—three different jumps before landing in the sandpit. All three of these watches—each in a limited edition of 100—are perfect companions not only for sportiving [??? red.] activities. The new variants in the Wempe100 series provide a sporty flair even in a rough everyday life. For it’s no coincidence that the trio Tangente Sport Hop, Tangente Sport Skip, and Tangente Sport Jump (all based on NOMOS’ design classic Tangente Sport) all refer to the triple jump: with their shockproof stainless steel case, sapphire crystal (only a diamond is harder!), waterproof quality to 10 atm, and a reinforced strap made of Horween Shell Cordovan, the new models are prepared to set new world records. Thanks to the fluorescent material of the numerals and hands, they’re also good for activities at night: there is no overlooking the time on these watches. The Jump model—named for the third of  the three leaps—even shows its caliber through the sapphire crystal back.

And finally, the price demands sporty speed, too: we are asking 100 euros less than for the normal models, so you’ve got to be fast.

Thanks for sharing these great pics Michiel, enjoy your beautiful new NOMOS!

Today it was announced that Wempe has dropped NOMOS from its line-up in response of the recent Chronext and Chrono24 dealerships.

We are convinced that we have made a significant contribution to the success of Nomos. The decision of Nomos founder Roland Schwertner to be the only watch brand to recognize the internet platforms Chronext and Chrono24 as an official partner was a great disappointment. We were completely surprised by this decision, because this procedure was not discussed in any way in advance with us. As a traditional family business, we have a different understanding of partnership. “The supply of previously non-licensed Internet platforms, which obtain their products mainly from the gray market, counteracts our marketing strategy,” says Kim-Eva Wempe.

While we usually don’t post our own views & opinions in Weltweit, this too interesting not to comment. Wempe must certainly be one of NOMOS biggest retailers and the partnership dates back the 1995. Wempe has done countless cool limited editions with them. To say it’s a firm statement would be a gross understatement!

At Minimatikal and Ace Jewelers our love for NOMOS hasn’t faded one bit – and we’ll be revealing something really cool soon!