Over the last two days, we were privileged to live and breathe all things NOMOS. Our visit to the Berlinerblau design offices in Berlin, and a grand tour of the NOMOS watch making facilities in Glashuette is a trip for the books. 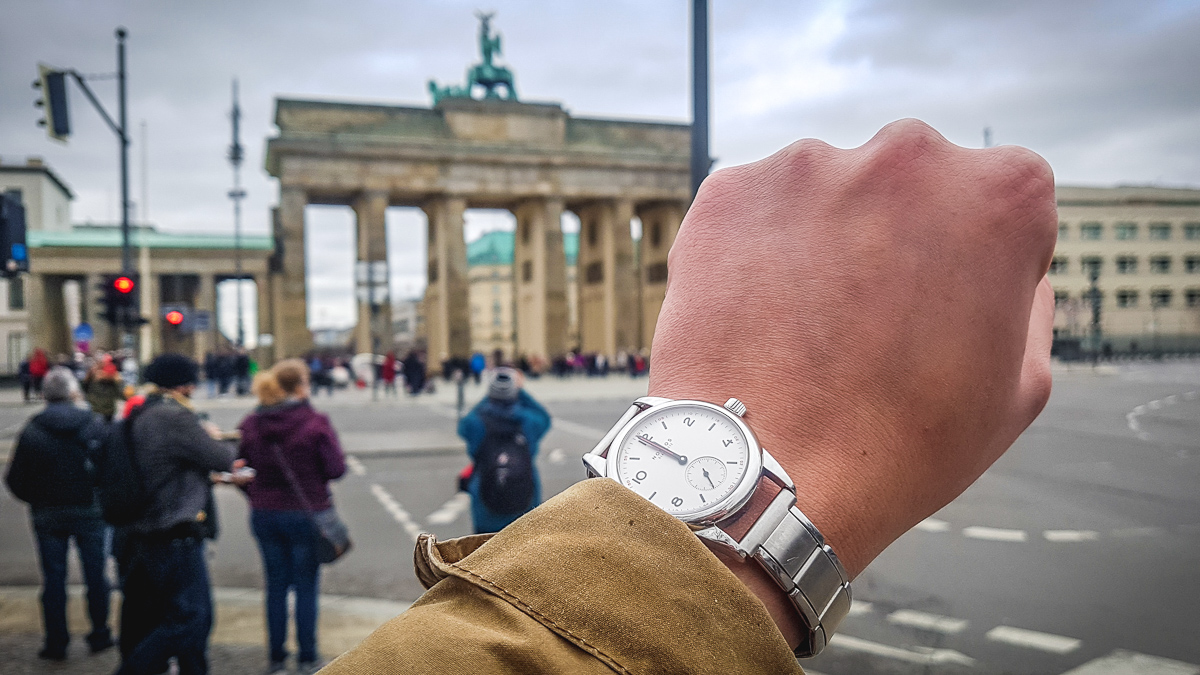 Our first steps on the streets of Berlin were along the Bundesstrasse. We headed to the Brandenburg Gate to take in a deep breath of Berlin culture straight away. It was truly amazing to be able to appreciate NOMOS watches in their birthplace of design, the city center of Berlin. While all watches are produced in Glashuette, the design team is based in this city. Berlinerblau was formally a design agency that NOMOS worked with on the design of their watches, but they have acquired the studio and they now do all of the design in-house. 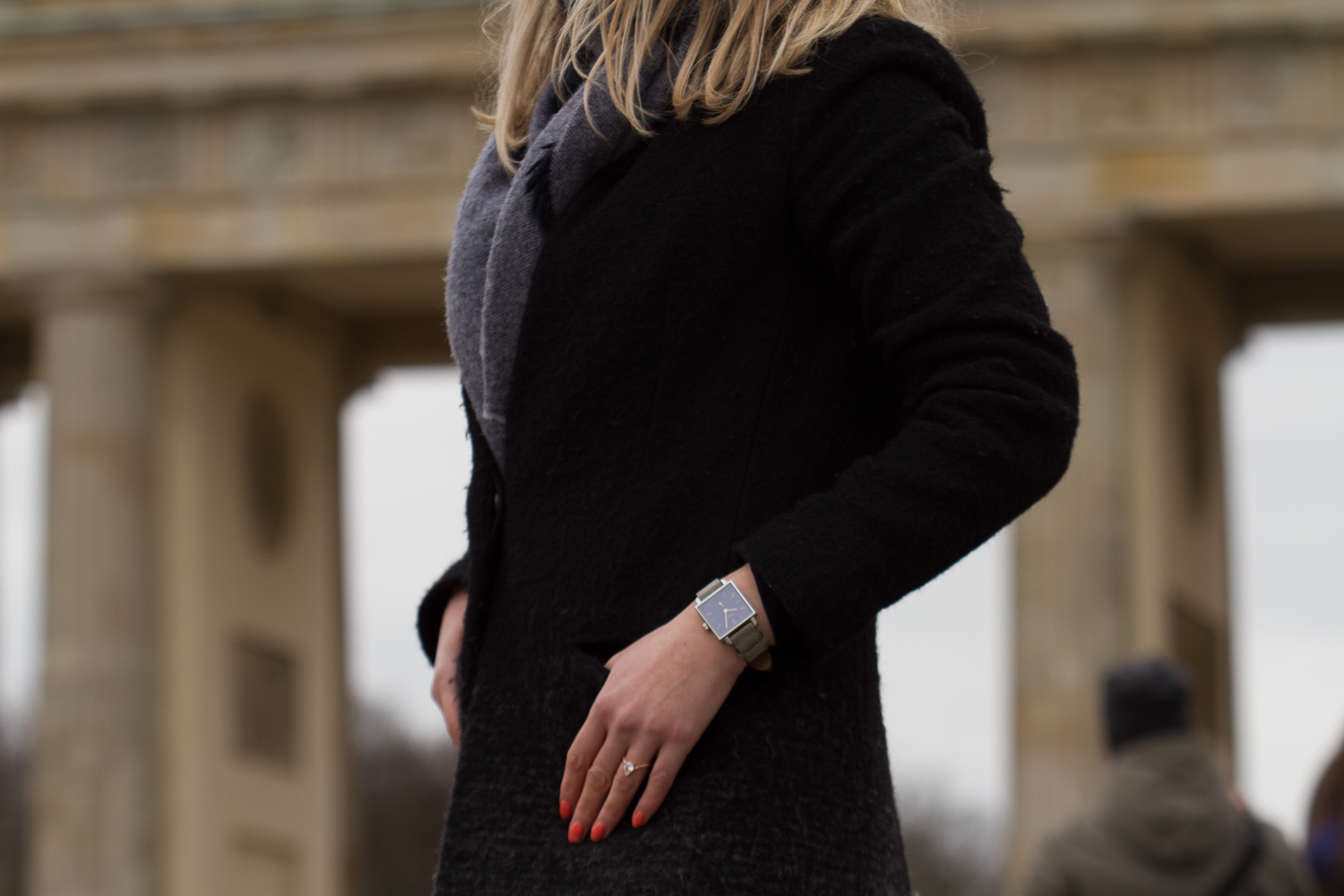 Berlinerblau is located in the Kreuzberg neighborhood in Berlin. An up and coming area in Berlin with graffiti clad, ornate, warehouse-like buildings. The neighborhood is full of galleries and nightlife, students, artists, creatives and hippies. Berlinerblau is located on the Landwehr Canal. You enter the offices through a courtyard and go up a few flights of stairs. The office has high ceilings and huge windows flooding the space with light. The quirky furnishings are quintessential NOMOS. 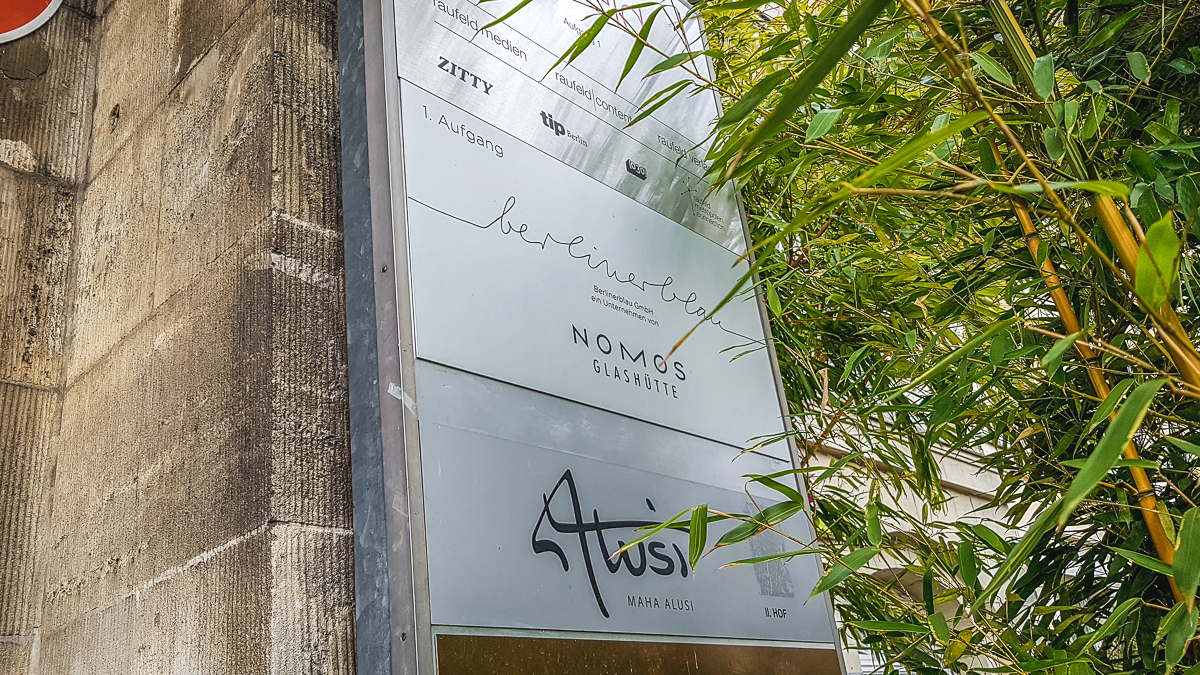 Thomas Hohne is one of the head designers at NOMOS Berlinerblau, and was the mastermind behind the beloved Ahoi. We were able to meet with him in a cool meeting room with big windows, looking out over the courtyard with pastel colored building across the way. The space was stimulating and well, very NOMOS. Naturally, Thomas was wearing the Ahoi in 40mm. He explained to us that he thought at first the size was slightly too big for his slender wrists. It took a little getting use to but after a while, he actually preferred the larger Ahoi to the 36mm option in the end. Even for Thomas, it can take some time to decide what size works best for your wrist.

When NOMOS decided to re-introduce a more ‘sporty’ watch into the collection after the discontinuation of the Tangente Sport, they needed a design that would fit in with the four core collections- the Tangente, Tetra, Ludwig and Orion. The Ahoi is not a dive watch; rather the purpose of the watch is to have a model that can withstand water and water sports, yet also be worn to the office with a suit. There is no rotating bezel, yet the crown protector and screw in crown give it both a rugged appeal and ensure that water stays out of the case for a 200 meter water resistance. Since 2016, the latter is highlighted by a little whale named Herbert engraved on the case back. 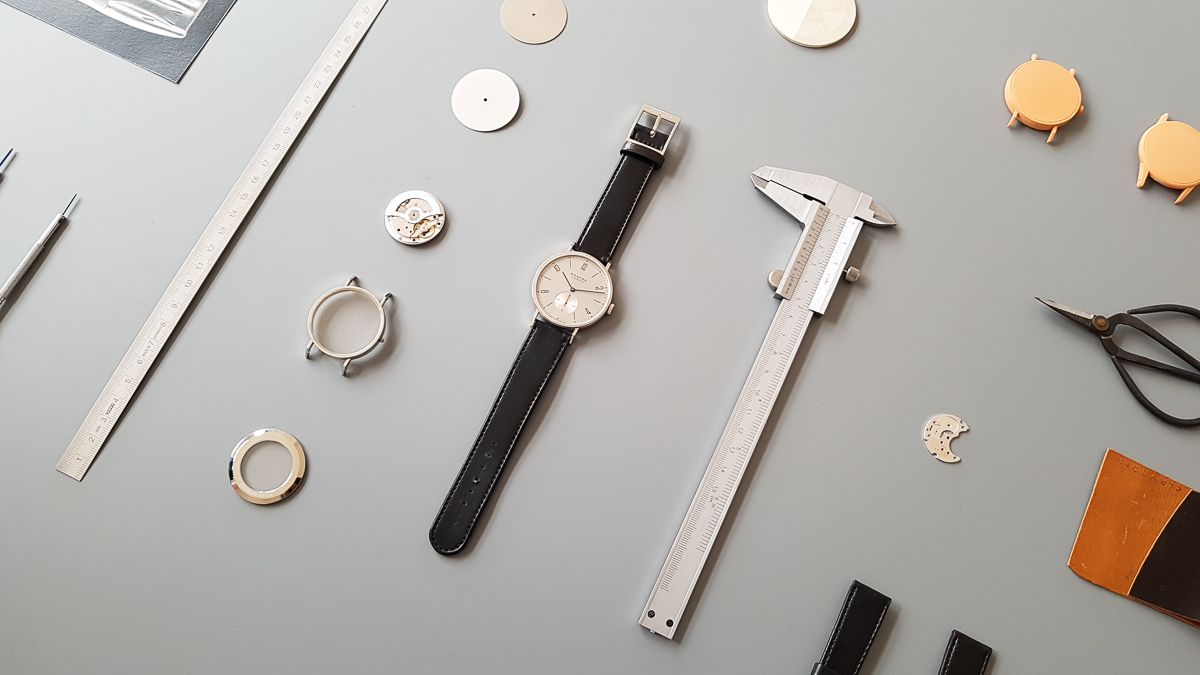 It was clear during the meeting that the watches NOMOS was most excited about were those in the new ‘At Work’ series. The walls were adorned with lifestyle photos of the watches being worn at work, as well as inspiration behind the Silvercut dials and accents. The design team wanted to produce more masculine watches, as the champagne series ended up having a more feminine feel. They showed us a millimeter gauge, an exacto blade, and watch making screw drivers. These are tools that one uses when they’re at work, and they set the mood for this new series. The 39mm size of this collection was really to appeal to career oriented [wo]men, who want to wear a bigger watch. The inspiration of the lines on the dial came from early German racing cars, which featured unpainted aluminum body parts to save weight – though that could be just a myth. NOMOS decided to make the lines of the dial horizontal rather than vertical, to simulate the the speed of those Silberpfeil cars. 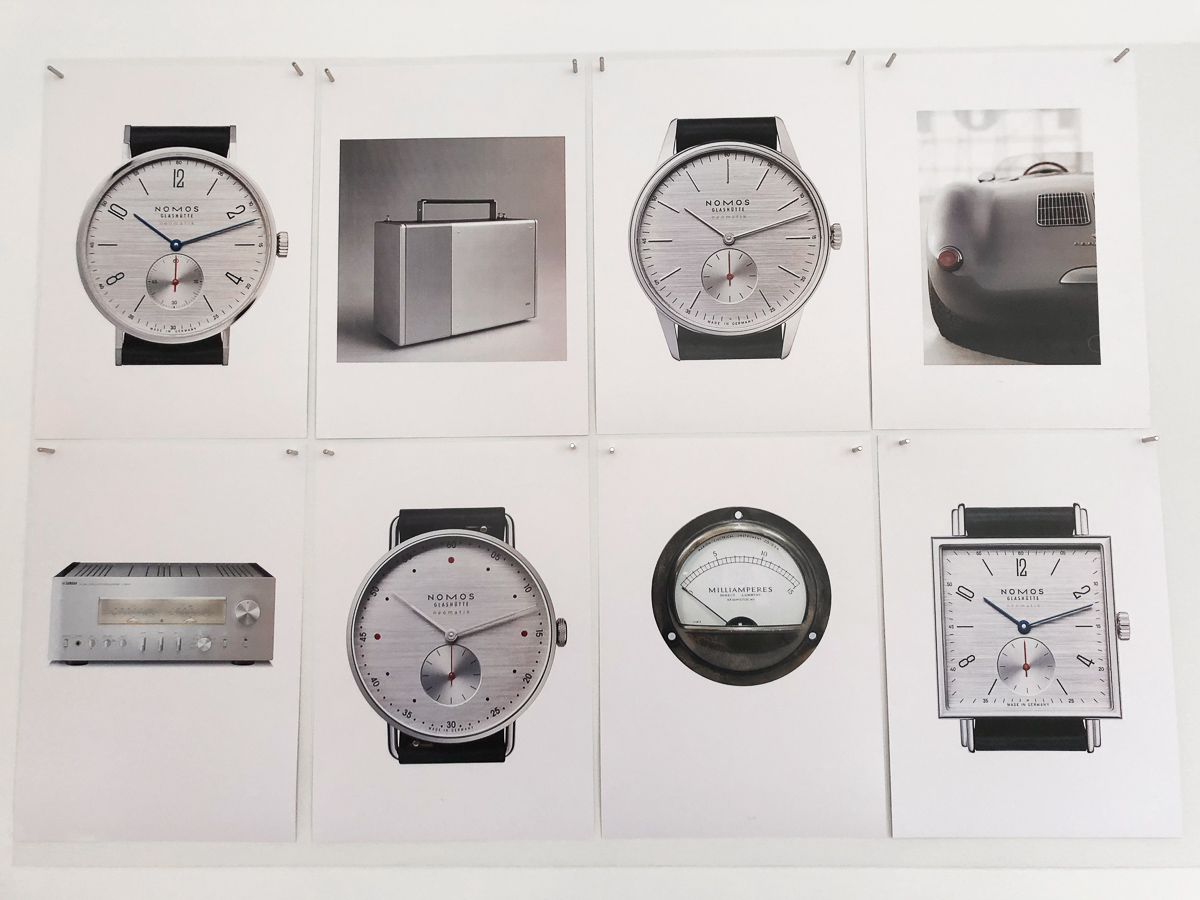 The red accents on the At Work series were inspired by brake lights, as well as power lights on vintage aluminum radios. The red seconds hands on the At Work series are a darker red than the regular ‘NOMOS red’ the designers tend to use. Notably, the Tangente and Tetra are the only two Silvercut models that feature blued steel hands. These two models are staying true to the original Tangente and Tetra. There is always some how a mix of old and new to blend the new pieces into the collection. The seconds subdials feature a slightly more subdued circular pattern in the middle. The softer texture gives the Silvercut models almost a starburst effect, like that of the volume knobs on the vintage aluminum radios. 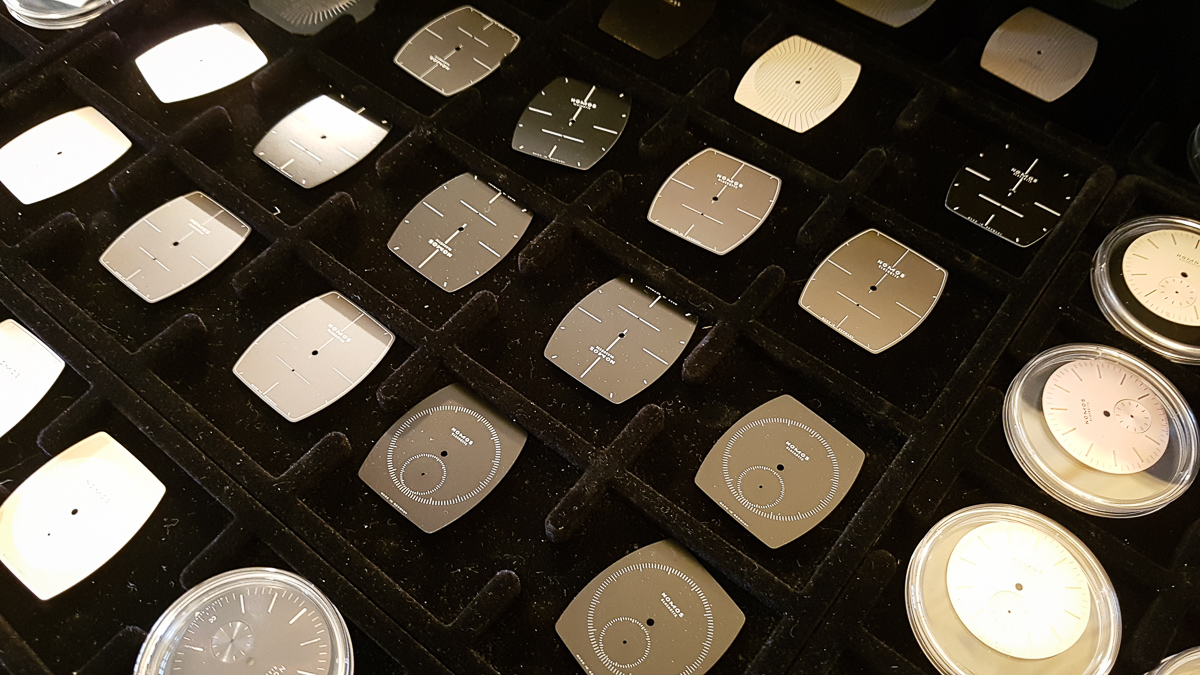 A highlight of the visit to Berlinerblau, was discovering a drawer filled with prototypes of dials. We felt like kids in a candy store. They had produced dials in almost every color imaginable; a purple dial with rose gold markers. Probably the most eye catching, were the prototypes for the Lux in black with white horizontal and vertical stripes. 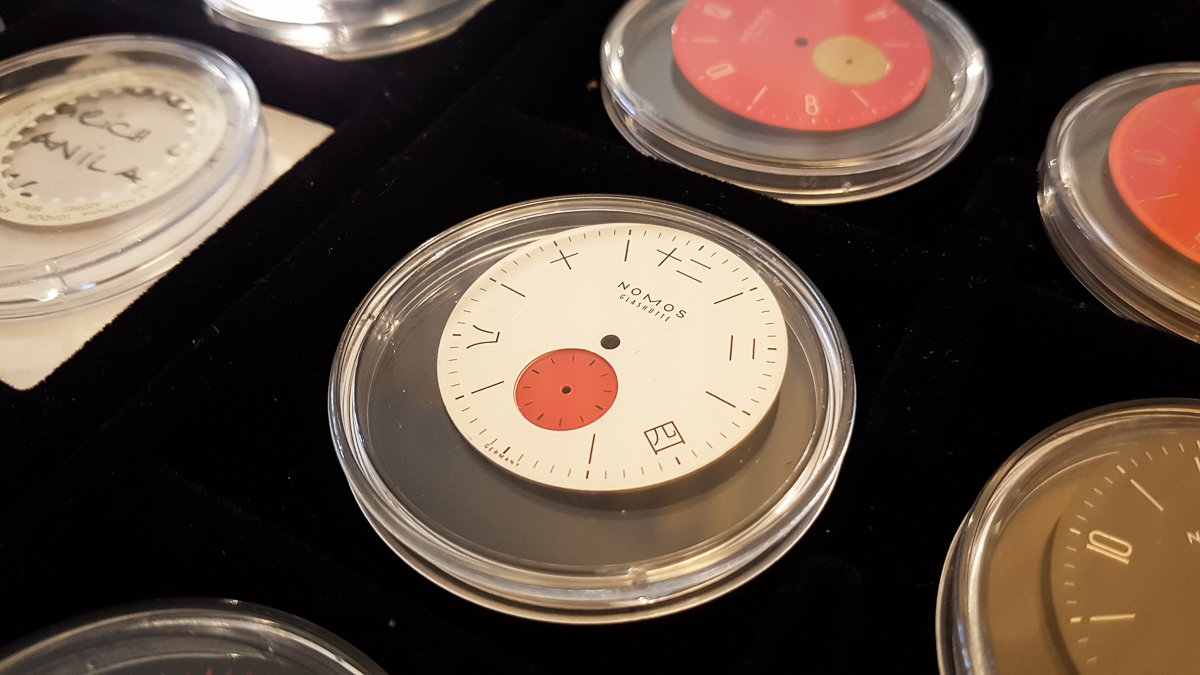 There were even pink and baby blue Gingham printed dials. Among all these prototypes we discovered quite a few that eventually made it into production as limited edition pieces, like the now very sough-after Toki of 2005 with its red subdial and Japanese hour markers and the Little Red Dot Weltzeit models made for Singapore. Of course the limited edition Orion ‘100 Years De Stijl’ was displayed loud and proud, which really made us feel part of the NOMOS family. 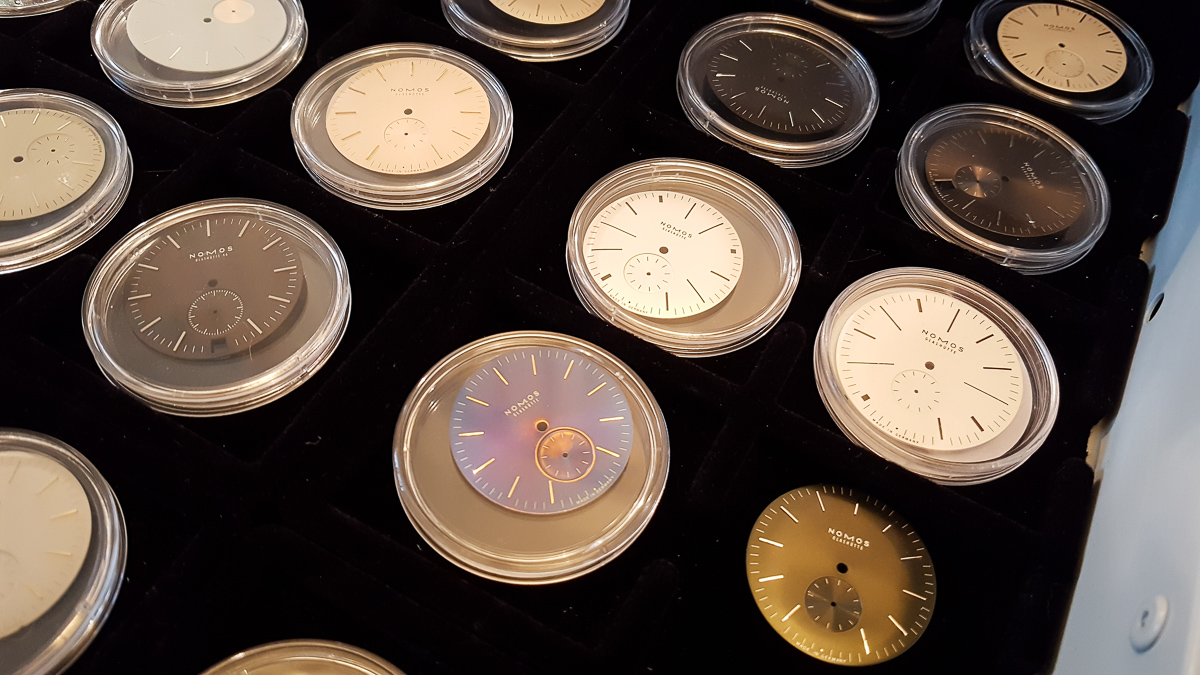 Once our tour of Berlinerblau concluded, we jumped on the Autobahn and headed to Dresden. The capital of the Eastern German state of Saxony, Dresden is a historic city with classical and ornate architecture. We were immediately impressed by the stunning classical architecture in Dresden. Walking across the bridge going over the Elbe river, we had a spectacular view of the Dresden skyline. Click here for DAY 2- the Glashuette chapter. 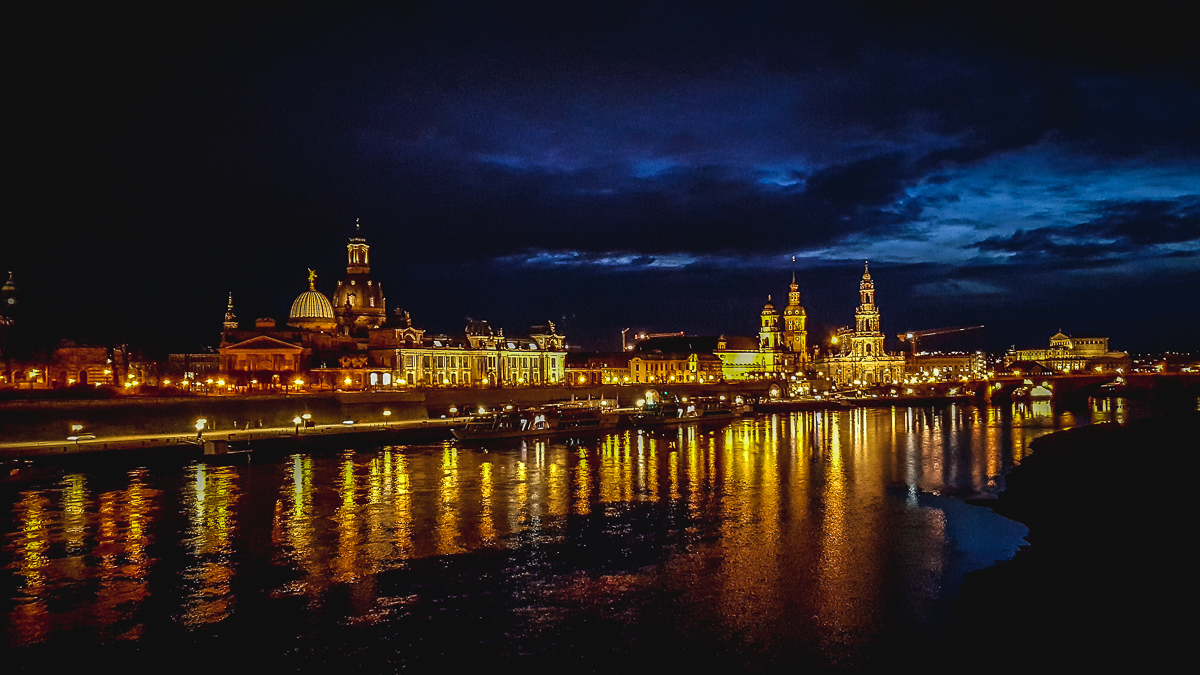 2 thoughts on “editorial: a whirlwind trip to Berlinerblau with MINIMATIKAL! DAY 1”